The “500 Sneaker March Giveaway,” will give 500 sneakers to Del Monte Facebook fans who enter and ten (10) Wii packages to people who get two (2) of their friends to sign up.

Step 2: Enter sweepstakes and sign the pledge to make at least half your plate fruits and vegetables and exercise more frequently. You will automatically be entered to win one of 500 pairs of sneakers. 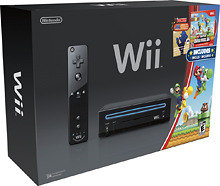 Step 3: Click on the “Sneaker Giveaway” tab then the “Invite Friends” to share news about the giveaway with your friends.

Step 4: Get just two (2) friends to enter the sweepstakes and you will be automatically entered to win the Nintendo Wii New Super Mario Bros. Pack game console and Wii Zumba Fitness

Disclosure: I will receive a promotional item for sharing this giveaway with my readers, however no monetary compensation has been received.

« Spring Wardrobe Must-Have: Lands’ End Fine Gauge Supima Cardigan {Review}
Ways to Give Back When Your Child is Born »

Hello there! I'm Emilie, a Minnesota mom of three boys who loves getting creative in the kitchen, cheering on my football team, traveling to new places and enjoying the simple things in life. I hope you'll stick around for easy recipes, fun projects and fabulous product finds to help you find the zest in your every day. Be sure to sign up for my free newsletter so you don't miss out on any updates!