My husband and I love movies we can watch with the kids and still enjoy ourselves. That is never more true than with Despicable Me 2. We became big fans of the first film after seeing the pre-screening as a family in Minneapolis.  My middle son became obsessed with his minion winter hat and it would draw smiles wherever we went. When the second movie came out, we couldn’t wait to find out what Gru and his minions were up to.

I took my two oldest boys to see the movie in the theater and was happy to see another great movie that we could laugh and enjoy together. This time around, Gru is on the side with the good guys, trying to track down a criminal using his expertise! The minions of course are up to their usual silly antics and Lucy, a new female character is introduced. There is one scene that could be a bit frightening for some young children involving a bunny, but my boys just brushed it off. They love this movie!

If you haven’t heard yet, it came out on Blu-ray and DVD on December 10th. Needless to say, I was thrilled when offered a copy of the movie to add to our collection.

Gru, his adorable girls, and the mischievous Minions are back with a cast of unforgettable new characters in the blockbuster sequel to the worldwide phenomenon.  Just as Gru has given up being super-bad to be a super-dad, the Anti-Villain League recruits him to track down a new criminal mastermind and save the world.   Partnered with secret agent Lucy Wilde, Gru, along with the wildly unpredictable Minions, must figure out how to keep his cover while also keeping up with his duties as a father.  Assemble the Minions for laugh-out-loud comedy in “one of the funniest, most enjoyable movies ever!” (MovieGuide®) 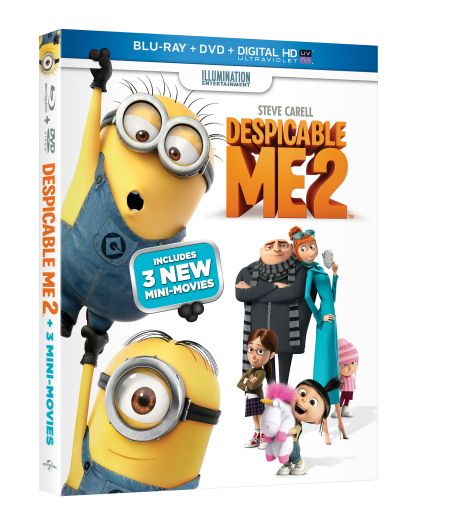 Three All-New Mini-Movies Starring the Minions—Introduced by Gru
Puppy, Panic in the Mailroom, Training Wheels
The Making of the Mini-Movies—A fun-filled take on the making of the mini-movies through the eyes of the artists who made them.
Deleted Scene
The Minions—A visit to Illumination Entertainment in Paris and Los Angeles to hear what it’s really like to work with the Minions.
Evil Minions—Bigger, badder and more purple than ever, the newest and fiercest addition to the Minion species can chew through metal and swallow a car. Find out more about the process that led to their creation and design.
A Gru-Some Transformation—A sit-down with Steve Carell as he discusses the transformation of Gru from the ultimate super-villain to super-dad and international spy.
El Hombre Malo: The Villainy Of El Macho—Every great story needs a good villain, and Despicable Me 2 brings on the diabolico in the form of El Macho! Learn about the creation of this character and the actor who brought him to life—Benjamin Bratt.

Gru’s Girls—Miranda Cosgrove, Elsie Kate Fisher and Dana Gaier weigh in on working with Steve Carell and playing the daughters of a world-famous super-villain!
Gadgets Galore—Lipstick tasers, magnet ships, foam dart dispensers and jelly guns—these are the nifty gadgets of Despicable Me 2. Illumination Entertainment pulls back the curtain on what it takes to build a world that would leave even James Bond envious.
Feature Commentary With Directors Chris Renaud & Pierre Coffin

Not surprising, it has broken records! In its first week of release it has produced the highest stales for any animated Blu-ray title in history in its opening week!

Minion mania continues to captivate consumers across North America this holiday season with the news that the home entertainment debut of  Despicable Me 2 generated $80 million in consumer spend across both physical and digital sell-through formats in its first week of release.  The year’s #1 comedy blockbuster sold  roughly four-and-a-half million units, bigger than any animated title launch since the home entertainment premiere of Despicable Me in 2010, and produced the highest sales for any animated Blu-ray title in history in its opening week.  On the digital front, Despicable Me 2 also vaulted to the top of the charts with the largest first week sales on record and is on pace to become the most successful-selling digital title of all time.  From Universal Studios Home Entertainment, Despicable Me 2 is currently available on Blu-ray and Blu-ray 3D Combo Packs, DVD and Digital HD including UltraViolet™.

Look for Despicable Me 2 in several formats online and and at retailers nationwide including Walmart and Target.

I received a copy of this movie, however all thoughts are my own.