I remember a decade ago when my niece and nephew would visit our house before we had kids. We had almost nothing for them to watch in terms of children’s movies. Flash forward to the present and we have built up quite the collection. It is important to us to have plenty of family friendly options that we all can enjoy together.

One of our very favorite family films has always been Finding Nemo. There is just something about this heartwarming tale that has always resonated with our family, not to mention the bright colors and interesting point of view. How often do we consider what it would be like to be a little fish in the big ocean? Or a little fish in a fish tank? 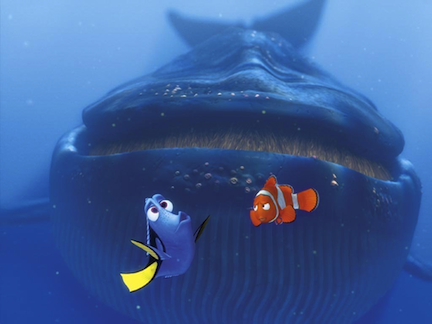 Combine that with Ellen DeGeneres’ scene stealing, forgetful fish Dory and it is hard to not love this movie. While I have so many favorite scenes from the movie, one has always been Dory speaking whale and her advice to Marlin about letting go.  It is hard, but sometimes you just have to trust that nothing bad is going to happen.

Another favorite is the “Fish are Friends (not food)” scene with the sharks. Do you remember this one?

Now Disney•Pixar’s “Finding Nemo” is back on Blu-rayTM. The Oscar®-winning underwater adventure with Marlin, new friend Dory and his son  Nemo is available for first time ever in high-definition Blu-ray, Blu-ray 3D and Digital platforms.

From the creators of Toy Story and Monsters, Inc., Disney•Pixar’s critically acclaimed and heartwarming tale splashes off the screen with brilliant digital picture, high definition sound and breathtaking 3D bonus features that transport you beyond your imagination. Featuring pristine high definition picture and sound, the Blu-ray creates an incredible at-home experience with a host of interactive features and bonus features including 3D Virtual Aquariums, 2D Virtual Aquariums, CineExplore, A Filmmakers’ Roundtable and more.

“Finding Nemo,” first released in theaters in 2003, earned the Oscar® for Best Animated Feature Film and remains the fifth highest grossing animated film worldwide. In 2008, the American Film Institute named ?Finding Nemo? among the top 10 greatest animated films ever made, and it is the second highest grossing Pixar film to date (behind “Toy Story 3”). 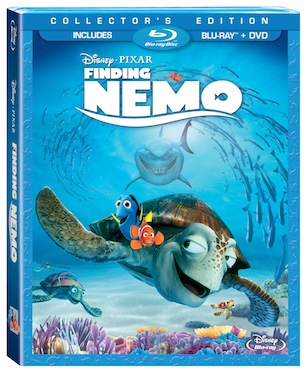 In this stunning underwater adventure teeming with memorable comedic characters and heartfelt emotion, “Finding Nemo” follows the momentous journey of an overprotective clownfish named Marlin (voiced by Albert Brooks) and his young son Nemo (voiced by Alexander Gould). When the two are unexpectedly separated in the Great Barrier Reef, Nemo is carried far from his ocean home and deposited in a fish tank in a dentist’s office. Buoyed by the companionship of Dory (voiced by Ellen DeGeneres), a friendly-but-forgetful blue tang fish, Marlin embarks on a dangerous trek and finds himself the unlikely hero of an epic effort to rescue his son––who hatches a few daring plans of his own to return safely home.

Disclosure: I received a copy of this film however all thoughts remain 100% my own.