*This post was sponsored by Pirate’s Booty.  All thoughts remain my own.*

When I was pregnant with my fourth baby Delaney, I absolutely could not get enough of Pirate’s Booty Baked Rice and Corn Puffs.  My Mother In Law brought them to a soccer game one day, and loved it.  I ate SEVERAL bags of them over the next few months.  Now Pirate’s Booty has come out with their own line of Mac & Cheese.  I was excited to try them out with my family. 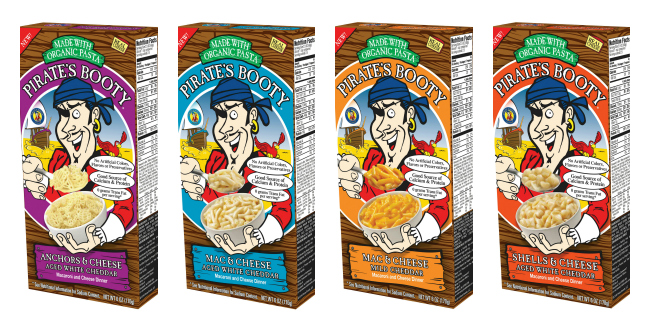 We recently had a couple of friends over for a playdate and I decided it was the perfect opportunity to try out the new Mac & Cheese on my little taste testers.  I let 5 year old Kurt choose the variety and he chose the Shells & Cheese Aged White Cheddar flavor. (I was actually surprised as I thought he would choose the Anchors first).

I made 2 boxes of the Shells & Cheese following the directions on the box.  I did use the “For richer, creamier flavor” option which increases the butter.  I knew my kids would prefer it this way.

The verdict?  They loved it. My 7 year old Danica said she didn’t like it, but she cleaned her entire plate without complaint, so I don’t think she really disliked it or she wouldn’t have eaten it without arguing with me.  The rest of the kids all agreed it was great.  I really liked it too.  My favorite part is that it is healthier than our traditional boxed Mac N Cheese that we eat.  No dyes!!!!  Yeah Pirate’s Booty!

A few days later we tried the Mac & Cheese Mild Cheddar variety.  Again, the kids all loved it.  Even Danica who said she liked this one better than the Shells & Cheese we previously had.  I think for her it was just a matter of the white cheddar vs mild cheddar flavor.  The Mac & Cheese was slightly lighter in color than our usual, and maybe slightly less salty, but tasted great.  My kids would easily eat this healthier option just as well as our old variety.

To celebrate their new Mac & Cheese products, Pirate’s Booty is hosting a “Cheesiest Joke In America” contest.  Enter by posting your cheesy joke on Pirate’s Booty’s Facebook page, or by posting the joke on Twitter, Vine or Instagram with the hashtag #MacAndCheesyJoke and tag @PiratesBooty. The submission period is 6/9 – 7/14; public voting period from 7/17 – 7/24 where the top joke will be selected. The Grand Prize is a family trip for four to the Wisconsin Dells. Daily prizes too!

You can submit a joke in writing, but to be eligible for the grand prize trip you must submit a video entry.  I think this would be a fun thing to do with my kids, but all of their jokes fail to have a punchline.  Their favorite forever was:

And that was the end of the joke.  Who is Ken Duchee?  I have NO IDEA.  I think it was something from on TV and possibly it was  Ken Duchee as in Can’t you see?…  something.  I don’t know.  It makes no sense, but they thought it was hilarious.

Hopefully you and your family can come up with something funnier or “cheesier” than mine!

Pirate’s Booty Mac & Cheese is now available nationwide.  Use the convenient store locator to find a retailer near you!

« Guide to Homegrown Raspberries: Tips for a Bountiful Harvest
Having Fun in the Sun: Summer Safety for Babies & Toddlers »