When it comes to entertaining in the summer, watermelon is the king of fruits. Having a backyard cookout, picnic or block party just doesn’t feel the same without this iconic summer fruit. Woman’s Day has kicked it up a notch with some amazing watermelon art in their latest issue. From watermelon turtles to dolphin bananas swimming in a watermelon wave, there are plenty of great ways to dress up any table using watermelon! Learn how to make a watermelon drink dispenser or watermelon animals bowls and centerpieces for your next celebration with these simple instructions from Woman’s Day.

Create a dazzling drink dispenser by poking a hole about a third of the way up the watermelon, and then screw in a  spigot so it fits snugly. Handwrite “Enjoy” above the spigot in permanent marker, then use a linoleum cutter to trace the letters and etch away the skin. Fill with watermelon limeade then replace the lid and position on a stand (Iron Tripod Base, $9.99)

Puree 16 cups seedless watermelon pieces in a blender, then mix with 1 ¼ cups lime juice. Pour over ice and top with a splash of ginger ale. Make this into a zippy cocktail by stirring in 4 cups vodka along with the lime juice. Serves 8 to 12.

Use a permanent marker to draw a large mouth on one end of an oval watermelon, scoop out the fruit with a melon baller, then return to the mouth along with berries. Use the extra rind to cut four teeth, two half-circles and two slightly smaller circles for eyes, plus two teardrop ears. Use a linoleum cutter to etch away the skin on the teeth, eyes and ears as shown, then attach using toothpicks. Finish by etching nostrils and wrinkles next to the eyes. 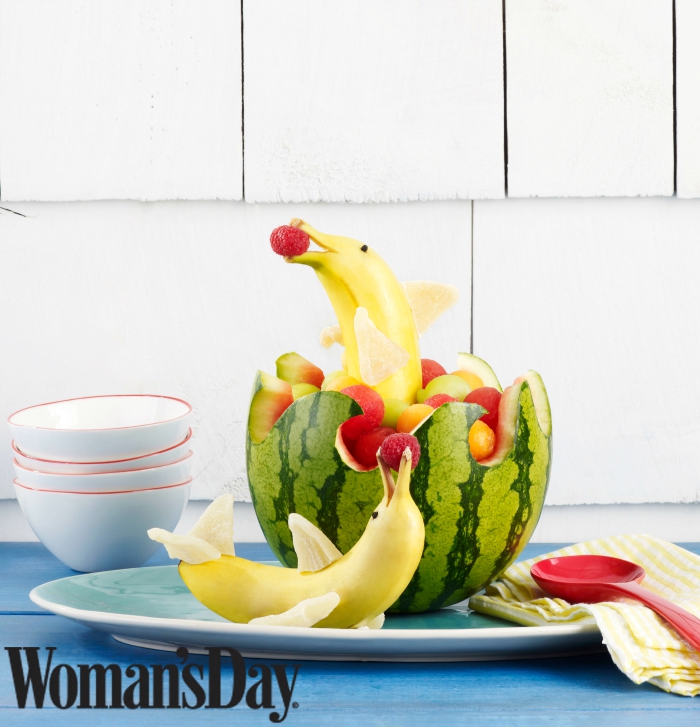 Slice the stem of a banana, spritz with lemon juice (to keep from browning) and place a small raspberry inside. Poke holes and insert peppercorn eyes, then attach grapefruit gummy candies with toothpicks for fins and a tail, as shown. Position the dolphin inside or next to the wave bowl.

Use a large serrated knife to cut an oval watermelon in half lengthwise. Scoop out the fruit. Draw a shell design in permanent marker on one half and add a matching border on the other half. With a linoleum cutter, trace the shell design to etch away the skin. From a second watermelon, cut five 4-in. pieces of rind for the head and legs; attach to the bottom half using toothpicks. Affix candy eyeballs with corn syrup. Fill with fruit, then use the top shell as a lid.

With a paring knife, cut a mouth into a round watermelon. From the cutout, carve a watermelon tongue and use a melon baller and the knife to make eyes from the rind; attach using toothpicks. Use a screwdriver to poke nostrils. From a second watermelon, use a large serrated knife to cut off the end, then cut it in half to create the two hind legs. Next, cut two 1-in.-thick wedges for the front legs. Using a paring knife, cut four feet from the rind. Secure, as shown, with toothpicks. When ready to serve, cut into pieces.

Be sure to check out the full spread in the July/August ’15 issue of Woman’s Day, on stands now!

Which of these watermelon ideas is your favorite?

This is not a sponsored post. Thank you to Woman’s Day for sharing these great ideas!