You are here: Home / Family / Lucian Starting Kindergarten Wasn’t What I Expected

I knew the day would come. The day that my “baby” entered our school system.

The day that he would be gone five days a week, all day instead of just a few days a week for a few hours.

The day that I would have to let him go and trust that the bus would bring him back.

Lucian was certainly ready to go to kindergarten last year. Having an end of August birthday and being a boy is the only reason we held him back and it isn’t a decision I’m certain yet was the right one.

I was really ready for this day that was delayed.

I thought I would cry. I thought that I would be at the very least emotional about this big step.

Instead I was a nervous wreck.

I was afraid I would oversleep. That somehow he would miss the bus or I wouldn’t give myself enough time in the morning.

I was also full of energy and excitement. I was so excited for him because he was so dang excited that I could have burst. I don’t know who was more thrilled, him or me.

All day all I could think about him. I kept looking at the daily schedule his teacher had given us at his open house to see what he would have been up to.

So when Lucian came home late off the bus, I couldn’t wait to find out about his day. I needed to know everything! And what did I get? 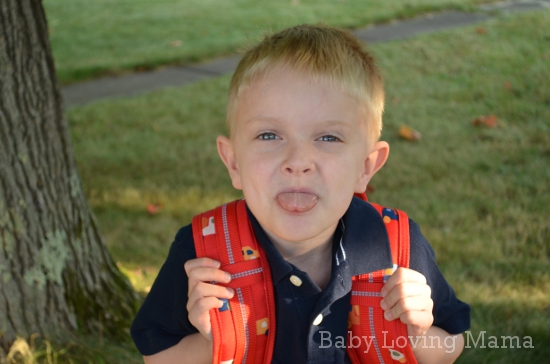 Sure, he was excited when he said it but wrangling any actual details out of him is near impossible. And I am not exaggerating. Each day since he started has been like this. I even encouraged him the first day with a new almanac, something I knew he’d love to tell me more. It certainly helped but getting real details were still like pulling teeth. Each day now I have to bribe him with something he wants, like to play with his iPod with telling me something about his day in order to find anything out. And even then it is vague like we had music today and I played with Legos. Today he told me I packed the perfect lunch.

This brings me back to my childhood years when my mom would ask about my day and I would answer, “School was school.” But that was junior high and beyond. Not kindergarten.

A week into school I pumped him for information about his friends. He confided that he likes lots of kids in his class but one in particular more than the others.

A girl who he told me he “gets flustered around.” This is something he says he has never felt before and he smiles whenever he talks about her. He told me about how she wears pig tails and doesn’t sit at his table during class.

Is my kindergartner really six going on sixteen? Does it really start this early?

At least there is one thing he does that lets me know he is still my little boy. He wants one more hug and kiss from me and his brothers at the bus stop which is the end of our driveaway.

And he doesn’t even care if all the kids on the bus are watching.

I’ll just hold on to that as long as I can.