Many of you know that when I first met Emilie of Baby Loving Mama I was pregnant with triplets. Three very much wanted, prayed for and fought for babies after years of infertility. At twenty-two weeks these three beautiful babies flew to the arms of Jesus a mere three hours after they went from the safety of my belly to my arms. Born too early and before medical viability we were with them for the entirety of their short lives and those moments have changed our lives forever. This is a story that’s hard to tell and much of that is because the world around loss parents doesn’t truly understand our pain. (To read more of our story visit my personal blog, Blessed with More.)

Some of that could change in the coming year as an independent feature film, “Return to Zero” has been produced to help shed a light on this journey. This is a story about stillbirth and has the potential to help us break the silence that surrounds the sweet names of the children that nobody sees; Alice, Elliot and Alexis. Enter to win an original print I designed in their memory below!

About “Return to Zero”

“Return to Zero” is an independent film starring Minnie Driver, Paul Adelstein, Alfred Molina, Connie Nielsen, Andrea Anders, Kathy Baker and Sarah Jones. Written and Directed by Sean Hanish, the film is based on the true story of Sean and his wife, Kiley, and their experience of stillbirth. Sean produced the film along with Paul Jaconi-Biery.

Harnessing the power of social media, the producers of the independent feature film “Return to Zero” have turned to the community that helped crowd-fund the film to spread the word.

Faced with the task of convincing distributors, who are key to getting independent films into theaters, that there is a market for the film, the producers of “Return to Zero” are empowering you to help market and promote this drama centered around stillbirth, which occurs over 26,000 times a year in the U.S. alone, with 4 million babies dying annually worldwide.

In just over a week, more than 2,300 people from over 40 countries have volunteered to be Local Leaders for the film — each Local Leader is charged with getting 100 people to pledge to see the film on opening weekend in their community.  In under 16 days, we have gathered over 56,000 pledges.

I signed up to become a Local Leader the moment I heard about this opportunity to help get this film into theaters. Would you be willing to sign this pledge form and help us petition the distributors? Please help me be a voice for my children.

“The response to our Local Leaders push has been astounding,” said Hanish.  “We’re going to be able to show distributors that not only is this a great film with some truly amazing performances, but that there is a built-in audience that will do whatever it takes to see it when it is released in theaters.”

“The sky’s the limit,” said Hanish. “We are truly grateful to have the support of so many people who are passionate about getting this important film seen by the world.  Together we are Shattering the Silence, one person and one community at a time.”

Please pledge to see Return to Zero. (You can enter my name, Janelle Wourms, as your Local Leader.) To learn more about the film visit the Return to Zero website. 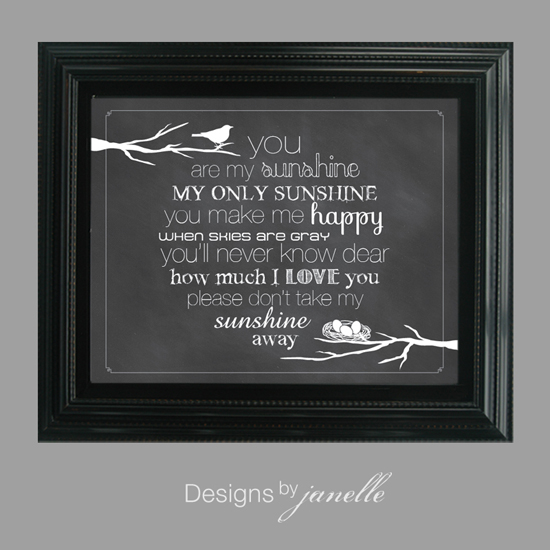 Inspired to make a difference by helping this film make it to theaters and ultimately help other loss families I’ve decided to give away one of my new typographic prints to FIVE winners who pledge to see the film.

This is the one and only song I sang to my babies as I held them in my arms. This print will be emailed to the winners in a high resolution digital JPEG format sized at 8″ x 10″ (I’m happy to change the background color and/or resize upon request within resolution limitations.). *Frame not included.

You must pledge to see the film Return To Zero to you enter this giveaway.
Please note that we will be checking names against the all of the pledge records and only the names that have been confirmed pledges will be included in this giveaway.

Disclosure:  Portions of this post are taken from the Return to Zero press release however all thoughts are my own.

Janelle, contributor of Finding Zest since 2012, is the proud mom to Nora (9) and Kate (2), and a freelance graphic designer (www.designsbyjanelle.com). She enjoys spending time with family, writing, crafting, and bargain shopping. Janelle dedicates much of her time to baby loss grief support, having lost five of her own, by donating memory boxes to local hospitals. Visit her at blessedwithmore.com where she shares her journey through infertility and loss.