While in Chicago for BlogHer, I was invited to attend the Phillips AVENT Blogger Breakfast. (Not affiliated with BlogHer.) Besides having the chance to enjoy breakfast with some lovely bloggers, we also learned about some of their feeding products, including their Philips AVENT Double Electric Comfort Breast Pump.

While I haven’t had the chance to test it out myself, I love many of the features I was able to see firsthand. As someone who has tested several breast pumps, I know what I like and that includes minimal parts for easy washing, and an intuitive, compact design. There is nothing I despise more than spending a lot of time trying to figure out how to get a breast pump to work properly. This pump has all of those features and more including massage cushions with a petal design to stimulate milk flow. 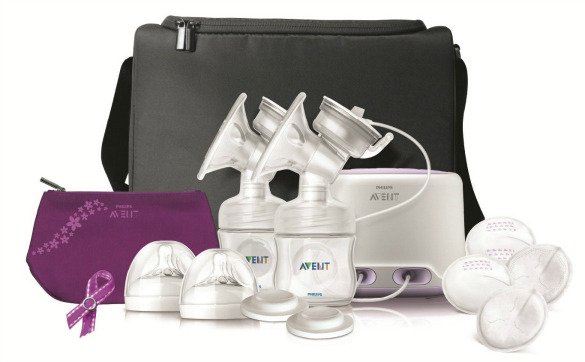 One product I was sent home with was the AVENT Natural Drinking Cup for toddlers. Designed for those 12 months and up, this 9 oz. cup offers a easier transition to the regular cup by use of its lip activated valve to dispense liquid.

Since my youngest just turned 17 months, I was really curious to try this cup out with him. With my older two boys we gradually introduced a cup without a valve long before letting them drink without any lid at all. But those all still had a spout and didn’t help them learn the proper way to drink from a rim like an adult cup requires.

We’ve been using this cup for a couple of weeks and so far Wesley really likes it. I was afraid he wouldn’t know what to do with it at first but he caught the hang of it right away. It seems to be a favorite of his now because of the fast flow valve which helps him drink with very little effort.

The handles still make it easy for him to grip and the cup itself is still very portable with the lid. I will say that my kiddo has figured out how to get around the valve and likes to play with his milk by pushing on the top of the cup and tilting the cup down. (Smart little guy.) Thankfully this usually happens at the end of the meal when he is getting bored so I’m able to take the cup away at that point. It does however make me cautious to only fill it with water when we are out so he doesn’t make a mess elsewhere. 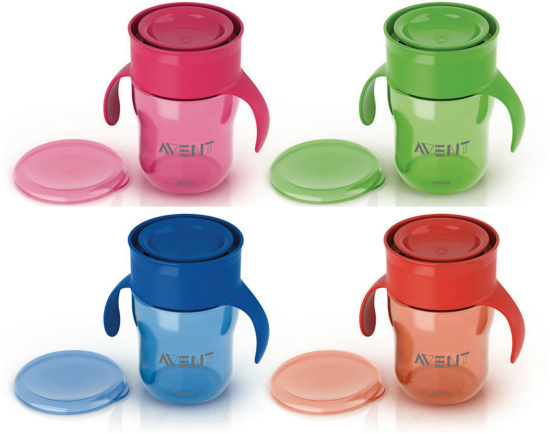 The Philips AVENT Natural Drinking Cup is available in four colors and has a retail list of $6.99 for one cup or $12.99 for a set of two. Look for them at retailers nationwide and online including Amazon, Toys’R US and Walmart.com. The Philips AVENT Double Electric Comfort Breast Pump has a list price of $274.99 but can be found under $200 at such retailers as Amazon and Walmart.

Disclosure: I received drinking cup samples however all thoughts remain my own.