Need a quick and easy fall dessert? Look no further than this pumpkin pudding that can be made in just 5 minutes! Garnished with gingerbread cookies, this pudding is flavored with canned pumpkin and cinnamon to transform box pudding into something special! Add this simple no-bake treat to your Christmas or Thanksgiving dessert table for a pie alternative.

Pumpkin pudding is your answer to a busy holiday season and Thanksgiving dessert (or even Christmas!). This features two classic holiday flavors with pumpkin and gingerbread. And while I love other holiday desserts like this pumpkin bread pudding and this cranberry upside down cake, I’ve come to appreciate desserts that require almost no effort like this one.

That is it to making pumpkin pudding!

How to Make Pumpkin Pudding

This Christmas or Thanksgiving pudding is so easy to whip together and would be a great option for kids to help in the kitchen. To start you’ll need to whisk the milk and the vanilla pudding mix. If you don’t have vanilla you can easily substitute french vanilla or cheesecake flavored instant pudding.

Next you’ll need to add the canned pumpkin and cinnamon. You could also add a dash of nutmeg if you like or substitute pumpkin pie spice for the cinnamon.

Fold in some whipped topping until fully combined.

Divide pudding evenly into four small dessert dishes or parfaits. You can serve this pumpkin pudding immediately but it tastes even better when it has had a chance to chill. Refrigerate until ready to serve. 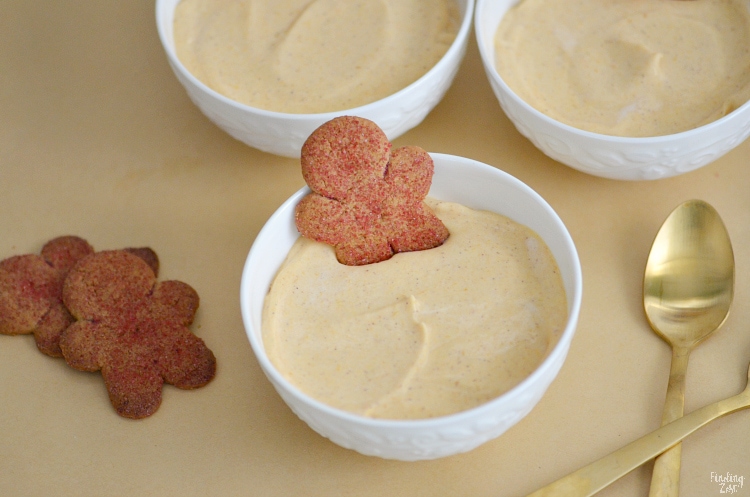 Top your pumpkin pudding with crumbled cookie and garnish with a gingerbread man. Alternatively, you could serve cookies on the side for dipping or use vanilla wafers or gingerbread snaps instead of gingerbread men.

Pumpkin pudding is a fabulous pie alternative for Thanksgiving dessert. Who says you have to slave in the kitchen for a delicious fall treat? Canned pumpkin and cinnamon transform a box pudding into something truly special. Serve this 5-minute dessert with gingerbread cookies for a great flavor combination.
Prep Time 5 minutes
Chill 30 minutes
Servings 4

Can substitute french vanilla or cheesecake pudding and pumkpkin pie spice instead of cinnamon, if preferred.
This pudding also makes a great dessert dip instead. Serve with gingersnaps, graham crackers or vanilla wafers.

This pudding also makes a great dessert dip rather than an individual dessert.  Instead of dividing up your pudding, serve it in a bowl with gingersnaps, graham crackers or vanilla wafers on the side.

I hope you love these easy holiday dessert idea that you can whip up in only 5 minutes.